Homophones: the Most Confusing Words in English (a List with Meanings) 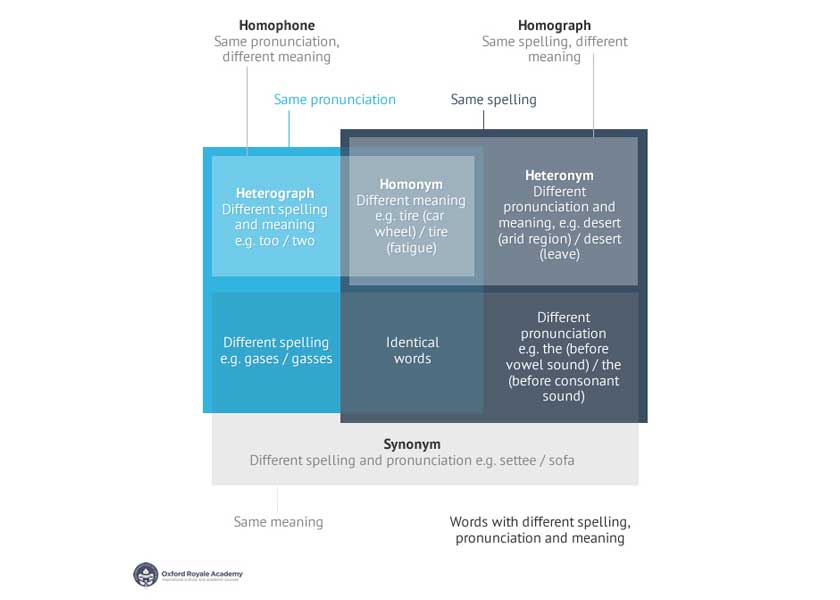 When you look at the number of homophones, it’s not difficult to see why so many students get caught out.
But what exactly is a homophone, I hear you ask? You’re about to find out as we take you through the meaning of homophony and the word-based conundrums they cause. Don’t worry though; we’ll introduce you to some of the most common ones so that you know to watch out for them!

What is a homophone?

On the subject of multinyms, it may surprise you to learn that in English, there is one instance of a multinym with no fewer than seven variations, all sounding the same but meaning different things. There’s also one instance of six variants, two of five, 24 of four and 88 of three. Some of the variants are archaic words that aren’t used anymore, so you needn’t concern yourself with them.

Below, we introduce you to some of the most common homophones – those that you’re likely to meet with in either day-to-day conversation or in your academic work. There are too many to include all of them, but these examples should at least help you with some of them and stand as a warning that the English language has plenty of pitfalls for you to be aware of!

Lots of native English-speakers get confused about this one. Luckily, though, these three words have very different uses, and the examples below should help you remember them.
To – used in the infinitive form of a verb, such as “to walk”, and also to mean “towards”.
Too – this means “as well” or “also”; for example, “me too”.
Two – this is the number; for example, “two days ago”.

Again, even native English-speakers get this one wrong, so don’t beat yourself up if you’re struggling with it!
There – this refers to a place that is not here; for instance, “over there”. It can also be used to state something, such as “There is an argument to suggest…”, or (in a slightly old-fashioned way) to comfort someone: “There there, it will be alright.”
Their – this indicates possession: something belonging to them. For example, “we could use their boat”.
They’re – this is a shortening of “they are”. For example, “They’re going to be here at 12pm”.

This has to be one of the most commonly confused aspects of the English language, and the fact that so many people get it wrong is a pet hate of every grammar purist in the UK. If you can master the difference, you’ll be doing better than a lot of Brits!
Your – this is the second person possessive form, indicating something belonging to you. For example, “This is your decision.”
You’re – short for “you are”, as in “You’re amazing.”
Bonus: Yore – you’re not very likely to come across this one, but it’s an old-fashioned way of referring to a time long ago. For example, “In the days of yore” means a similar thing to “In olden times”.

Another one on the long list of commonly confused words, these three are easily differentiated with some examples.
By – this preposition refers to something beside, near or through. For example, “There’s an ice cream van over there by that tree.”
Buy – this is a verb meaning to purchase something. For instance, “let’s go and buy a car.”
Bye – short for “goodbye”, this is an expression used to bid someone farewell. Real grammar sticklers would probably insist on using an apostrophe at the beginning to indicate the absence of the word “good” – that is, “’bye” – but this is old-fashioned, so you don’t need to include one.

One letter makes a big difference with these two, completely altering the meaning.
Stationary – this word is used to describe something that is motionless (not moving). For example, “the cars were stationary in the traffic jam.”
Stationery – pens, pencils and other things you write with or on, for use in the office or when studying.

The adjective forms of these two words add an extra layer of complexity for you to contend with.
Compliment – this is a nice thing you say to someone to flatter them, for example, “You look nice today.” The adjective of this is “complimentary”, which has two meanings. It can refer to something expressing praise – such as “He was most complimentary, saying how pretty I looked.” But just to add to the confusion, “complimentary” can also mean “free of charge”. For example, “the airline provided complimentary drinks for those delayed”.
Complement – this is something that goes well with something else. For example, “the dress complemented the colour of her hair.” The adjective form is “complementary”, meaning things that go together, used as follows: “The two of them provided complementary skills; he was good at writing, while she was good at sales.”

Same letters, different order – and that makes all the difference!
Brake – this spelling refers to the brakes on a car or other vehicle, and in a wider sense to slowing down. For example, “He applied the brakes to slow the car down.”
Break – confusingly, this spelling this has several meanings.
As a verb, “to break” means to separate something into parts. For example, “I’m going to break this chocolate bar into three so we can share.”
○ As a noun, it can be used to signify a pause or stop, such as “a break in the schedule”, or you can “take a break”, meaning have some time off.
○ You can also use the word to describe the consequences of the verb – when you “break” something, it is “broken” and the site of the separation can be referred to as “the break”. For instance, “He broke his leg, but the break is mending.”

If you’ve been browsing our website, you’ll probably know at least one of these meanings! Here are all the possible definitions.
Course – this has many meanings.
○ A course is what we offer here at Oxford Royale Summer Schools – a programme of educational study.
○ “Of course” means “naturally”. For example, “Would you like a chocolate?” – “Of course!”
○ It can also mean “direction”; for instance, an “unexpected course of events” describes events unfolding in an unanticipated direction. You could also say, “I don’t know what course of action to take”, or “The plane took a northerly course.”
○ In sport, it describes an area of land or water set aside for the purpose of a particular activity, such as a “golf course”, “water skiing course” or “cross country course”.
○ Another context in which you might hear this word is to describe parts of a meal. For instance, the “main course” is the most substantial part of the meal.
○ Less often heard is the use of this word to describe hunting with dogs, such as “hare coursing”.
○ As a verb, “to course” refers to the movement of liquid, such as “water coursing through a channel”.
Coarse – this word is used to describe things that are rough or crude. This could be rough in texture – as in “sandpaper is very coarse” – or to describe language, such as “His humour was very coarse.”

You’ll find a cunning way to remember the difference between these two under the definition for “hear” below.
Here – this refers to something being in one’s current location – for example, “There is a strange smell here”. You can also use it when introducing something, such as “Here is something I know you’ll like.”
Hear – this means to detect a sound. If it helps you remember it, consider the fact that the word “hear” contains the word “ear”! You can also say “Hear, hear” to indicate that you agree with someone. This bizarre phrase is a shortened form of a 17th century phrase used in Parliament, “Hear him, hear

John Lennon famously sang “Give peace a chance”. Make sure you don’t upset Beatles fans by getting the spelling right!
Peace – this is the absence of war, as referred to by Lennon in 1969. The word also refers more generally to a feeling of contentment, for example “The woods were very peaceful.”
Piece – spelled this way, the word means a unit or portion of something, such as “a piece of cake”. To “say your piece” means to state your opinion about something, while “giving someone a piece of your mind” means to tell them – usually in anger – exactly what you think of a situation.

Two words with almost entirely opposite meanings. The W is silent, because the English language likes to confuse us with apparently unnecessary silent letters.
Whole – this means “complete” or “entire” – used as in “the whole story”.
Hole – a “hole” indicates a lack of something, as in an opening. For example, the hole in a ring doughnut is the missing bit in the middle, while a “Black Hole” is an invisible area of space that appears to have nothing in it, because its gravity prevents even light from escaping.

These identical-sounding words both derive from Old English words with Germanic origins.
Stare – the verb “to stare” refers to the act of gazing intently at something. As a noun, it refers to the look itself – for example “a long, cold stare”.
Stair – this refers to a single step, or one of a number of steps, used to connect two different levels, with variants including “staircase” (the complete set of steps), “stairway” (the steps and their surrounding walls), “stairwell” (the shaft occupied by the staircase), “downstairs” (the bottom level) and “upstairs” (the upper level).

As this example illustrates, it’s amazing how much difference it makes to put unlikely letters at the beginning and end of a word.
Know – “to know” means “to be aware of something”; for example, “I know he is afraid.” The K at the beginning is one of a number of instances in the English language of a silent K, so it’s pronounced in exactly the same way as “no” – even though if you take the K off, you have the word “now”, which is pronounced in a way that rhymes it with “how”. Just another example of unexpected exceptions to English language rules!
No – the opposite of “yes”, used to indicate the negative. Bizarrely, “no.” – with a full stop after it – is also used to abbreviate the word “number”. For example, “No. of pages: 150.”

To finish, this is the seven-variant multinym we mentioned earlier. Don’t worry – you’re not likely to come across many of these, but we thought you might like to see it to give you an idea of just how complex the English language can be!
Raise – to lift something up
Rays – sunbeams
Rase – to erase something
Raze – to knock something down
Rehs – sodium salt mixtures
Réis – plural of real (the currency of Portugal until 1911)
Res – plural of re, as in the musical scale (doh re mi, for fans of The Sound of Music)

If you’ve enjoyed this introduction to some of the quirks of the English language and you’d like to advance your English skills further by learning some more, why not apply to study at our English as a Foreign Language Summer School?

11 English Clichés and What They Mean: Useful Fun for English Learners

It doesn’t matter how far down the road you are with learning English; it’s a language that has a habit of catching you unawares with…

We recently discussed English slang, in the context of which we observed that there are numerous slang words found within specific regions of the UK…

14 of the Most Fascinating Word Origins in the English Language