The Story Behind the Bridge of Sighs 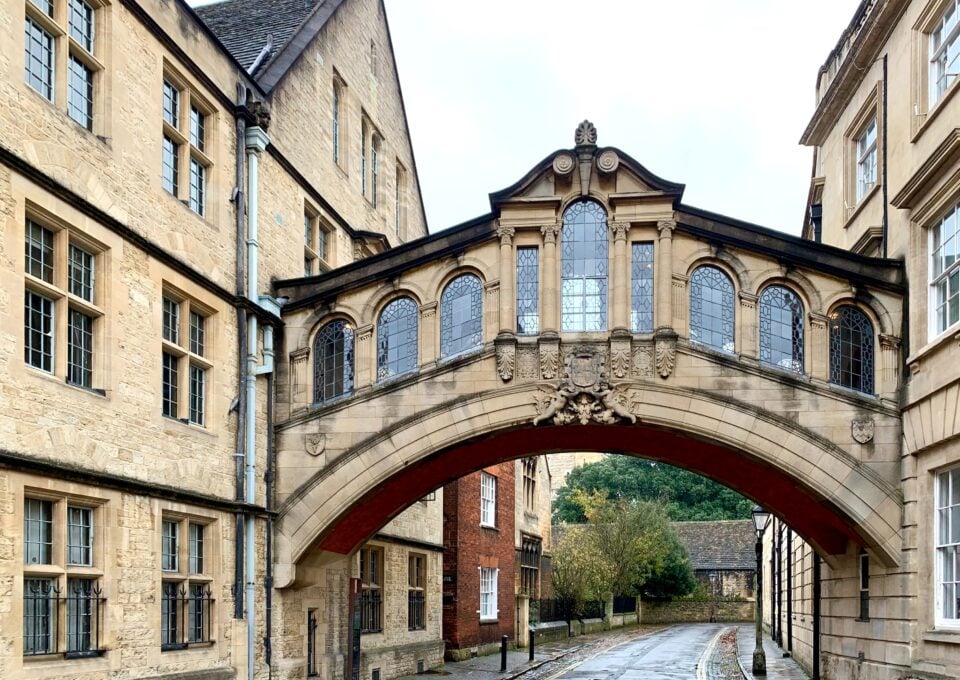 The city of Oxford is full of fascinating, beautiful architecture and historical wonder. There are also fascinating parks and green spaces like the Oxford Botanical garden – the oldest botanical garden in the UK.

The educational grandeur of Oxford has produced some architectural masterpieces. Amazingly the world-renowned Oxford University pre-dates the Aztec civilisation as teaching began at least as early as 1096. Tourists flock to the city to marvel at half millennia-old Renaissance buildings such as Christ Church, which date back to the era of Henry VIII.

In recent times a new kind of tourist has arisen – film and TV fans. The majestic buildings and grounds of Oxford have lent themselves to famous film franchises such as Harry Potter and X-Men. Perhaps nothing more symbolises the bridging of this old and new than Hertford bridge, one of the most recognisable structures in Oxford. Hertford bridge is commonly known as “The Bridge of Sighs”.

But what is the history behind this beautiful bridge? Let’s dive in to find out more.

What is the history behind the Bridge of Sighs?

Hertford Bridge, better known as the Bridge of Sighs, is a famous bridge in Oxford. Heralded for its uniquely striking design, the bridge has become a landmark for sightseers.

Completed in 1914, this beautiful bridge acts as a link between two Hertford College buildings. Designer Sir Thomas Jackson had become well known for his works on Oxford University colleges, including on Trinity, Brasenose, and Hertford. And so, it is unsurprising the university authorities commissioned him to link two buildings over New College Lane.

Hertford bridge has been given its more common name as it is falsely believed to be a replica of the Bridge of Sighs in Venice. However, this is not the case. The bridge more closely resembles the Rialto Bridge.

The bridge also carries a storied history of mythology and fact, further enhancing its appeal.

The University of Oxford is one of the oldest universities in the world. So, as to be expected, Hertford college has a long and celebrated past.

Later in 1914 Hertford Bridge (Bridge of Sighs) would link the old and new quadrangles connecting the past and present. But first, the college itself had to be established. Let us look at its rich and rocky history.

The establishment of Hart Hall

In 1283, Elias de Hertford established Hart Hall, which would later be recognised as Hertford College. Hart Hall was not officially named Hart Hall but is said to have been given the nickname as a pun of the owner’s name. The first documented use of Hart Hall was in 1301.

This “Old Hall” still stands today forming a quadrangle with the Old Buildings such as; The Gatehouse (The Lodge), The Senior Common Room, an 18th-century cottage, Jacksons Chapel, and the library.

1740 was the year Hertford College gained full college status. Despite decades of furious opposition by the fellows of Exeter College Principal Newton secured a charter and status as a full Oxford University college. The principal originally tried to have a charter secured in 1723 but Exeter College fellows were particularly unhappy as they still owned part of the site. The Bishop of Exeter also used his political influence to stop the original charter.

Just a few years later Hertford College was no longer. Principal Newton relied on contributions by benefactor Thomas Strangways but he died in 1726. This meant the college from its conception started with insufficient funding. When the last Principle – Dr. Hodgson, died in 1805 no one took over the role.

Vice Principle Hewitt was blocked from becoming principle by the then Dean of Christ Church. The institution was dissolved and much of the remaining assets were given to Magdalen Hall. Vice-Principle Hewitt was the last fellow until his death in 1818.

Despite previous failures, Principal Michell sought to restore the site to its former glory. And, thanks to a benefaction from Sir Thomas Baring MP (a leading financier) he did just that. An Act of Parliament elevated Magdalen Hall to collegiate status in 1874. This meant the previously abolished Hertford College could be re-established.

From 1877 Principle Boyd refounded the college and expanded it with new buildings. Revivalist architect Thomas Jackson poured his soul into the college, building a new Lodge and hall in 1887. Inspired by a staircase in the 16th century French Château de Blois in the Loire Valley, he built the renowned Staircase 2 of the Old Buildings Quad.

Jackson who was later recognised with a knighthood for his work also designed the Hertford bridge. This was completed in 1914 and was soon after nicknamed the Bridge of Sighs.

This bridge would symbolically link the old and new quads of Hertford College.

The legend of the Bridge of Sighs

The legend of the Bridge of Sighs is a decades-old but entirely false story. As the story goes, many decades ago a health survey was performed on Oxford University students. Hertford College students were said to be heavier than any of the other students. So in response, the university imposed restrictions on them. The bridge was closed off forcing Hertford College students to take the stairs for more exercise, thus losing weight.

However, this historic tale of discrimination is untrue. This is provable by one single fact: Students would actually have to climb more stairs if they did not use the bridge. The bridge has also always remained open.

All of this is a far cry from the legends of romance and terror of the bridge’s namesake in Venice. It is said that lovers are gifted eternal love when sharing a lover’s kiss on a gondola, at the exact moment of sunset, under the bridge, when the bells of St Mark’s Campanile can be heard.

Perhaps the most famous person to talk about Venice’s Bridge of Sighs is Lord Byron. He stated in a poem that it was the last point where condemned prisoners could see the beautiful city of Venice before being taken to execution.

Oxford’s legend of the Bridge of Sighs is far less romanticised but it is a quirky and interesting urban legend with a character of its own!

The modern history of the Bridge of Sighs

As the bridge serves as a link between the old and new quads of Hertford college – it is only fitting that it bridges old and modern history. Since its inception, it has become a regular visitor attraction.

But, how has the bridge been defined and celebrated in recent history?

Centenary celebration of the Bridge of Sighs

In 2014, the bridge’s centenary was celebrated. A creatively unusual and theatrical celebration was launched by Composer Dr Benjamin Skipp. A sound installation entitled Sospiri (Sighs) was set up – playing to pedestrians passing underneath. However, this was not exquisite orchestral music but recordings of students and lecturers. In particular, the sounds of sighs that students and staff had recorded.

Award-winning producer Anthony Geffen also showcased a short film about the college along with a talk.

The Bridge of Sighs in Film and TV

The Bridge of Sighs is further being immortalised in the archives of film and TV. The beautiful architecture and central location mean the bridge is a perfect backdrop for filming.

Firstly, it was regularly shown in the British TV show Inspector Morse, which ran for 13 years from 1987 to 2000.

More recently in 2011, the bridge was featured in the Hollywood blockbuster X Men First Class. Being a critically acclaimed film in a popular franchise, the film ensured the architectural masterpiece of The Bridge of Sighs will continue to be appreciated by superhero fans for years to come.

Hertford Bridge, known colloquially as the Bridge of Sighs has been established as a tourist hotspot. It is an attraction known for its beauty, mystery, and intrigue. It is also a link between the new and old quadrangles of the historical Hertford College.

From 1877, Principle Boyd grew the college to prestigious new levels using architect Sir Thomas Jackson. Jackson quickly used his architectural genius to restore and reinvent the college. Symbolic of this was the Hertford Bridge. This bridge over New College Lane represented strength and unity between the two quadrangles.

There are many myths and inaccuracies about the Bridge of Sighs. For one, it was not modelled after the Bridge of Sighs at Doge’s Palace in Venice, Italy. Moreover, it was never closed to members of Hertford college students because they were overweight and needed exercise.

Modern celebrations of the bridge prove it is still heralded today for its brilliance. The Bridge of Sighs was celebrated on its centenary with a modern concept that captured the theme of university sighs perfectly. Sounds of sighs were played to pedestrians passing under the bridge to represent the emotions, both good and bad, of university study.

It is also regularly used as a backdrop for film and TV enshrining its prestige for future generations.