The Dining Hall of Christ Church, Oxford, provided inspiration for the film version of the Great Hall at Hogwarts.

Swapping Spells for Seminars and Magic for Matriculation, Emma Watson, star of the Harry Potter films, has embarked on her much publicised year at Oxford University. The actress, 21, a permanent student at Brown University in the United States, is now a visiting student at Worcester College studying English for the 2011-2012 academic year.

This represents something of a homecoming for Emma Watson. She attended the prestigious Dragon and Headington Schools, both in Oxford, and added high grades to her glittering film accolades. Watson was quoted as saying:

“The most challenging aspect of this film was the fact that I was trying to take my A-levels at the same time I was filming. So my life was crazy. One minute I was on set, and the next minute I was doing an exam, or reading a textbook, or doing something, so I was a bit all over the place. Sometimes it’s kind of hard to juggle both aspects of my life.”

Emma Watson should therefore be no stranger to life at Oxford University. Students wishing to involve themselves in extra-curricular life must juggle this with a hectic academic schedule. Unlike Hermione in Harry Potter, Watson will not have access to a Time Turner.

The actress may also wish for Harry Potter’s invisibility cloak, so often a crucial saviour, such is her stardom and fame. Emma Watson being spotted in lectures and libraries in Oxford has formed a substantial part of the student discourse throughout the first two weeks of term, and this looks set to continue.

Students at Oxford Royale Summer Schools, like Emma Watson in Oxford, have such a stimulating experience on our programmes because of the range of activities provided in addition to their academic work. This gives students an idea of what life might be like for Emma Watson and other Oxford University students. If, like Emma Watson, students wish to study in the United States, ORA’s SAT Preparation programme could be the ideal foundation for an application. Details of this programme can be found at Oxford summer school SAT Preparation programme.

This century, the University of Oxford will celebrate its thousandth birthday. You should also read… 5 Things You Didn’t Know About Oxford and the Second… If you’re dead set on going to Oxford, it’s important to remember that there are still four other places on your UCAS form. You should… 10 Oxford Donors and How They Made Their Money

The University of Oxford has a long and rich history of philanthropic donations. You should also read… 4 Oxford Clothing Traditions and Their History 7… 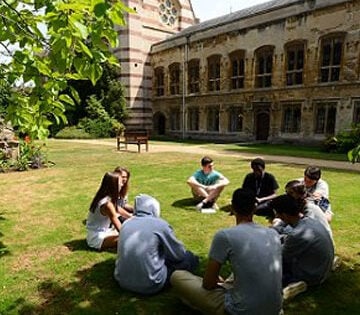 4 Ways ORA Has Been Inspired by the University of Oxford

Since our foundation, Oxford Royale Academy has been inspired by the University of Oxford. Though we aren’t affiliated with the university, we know that our…